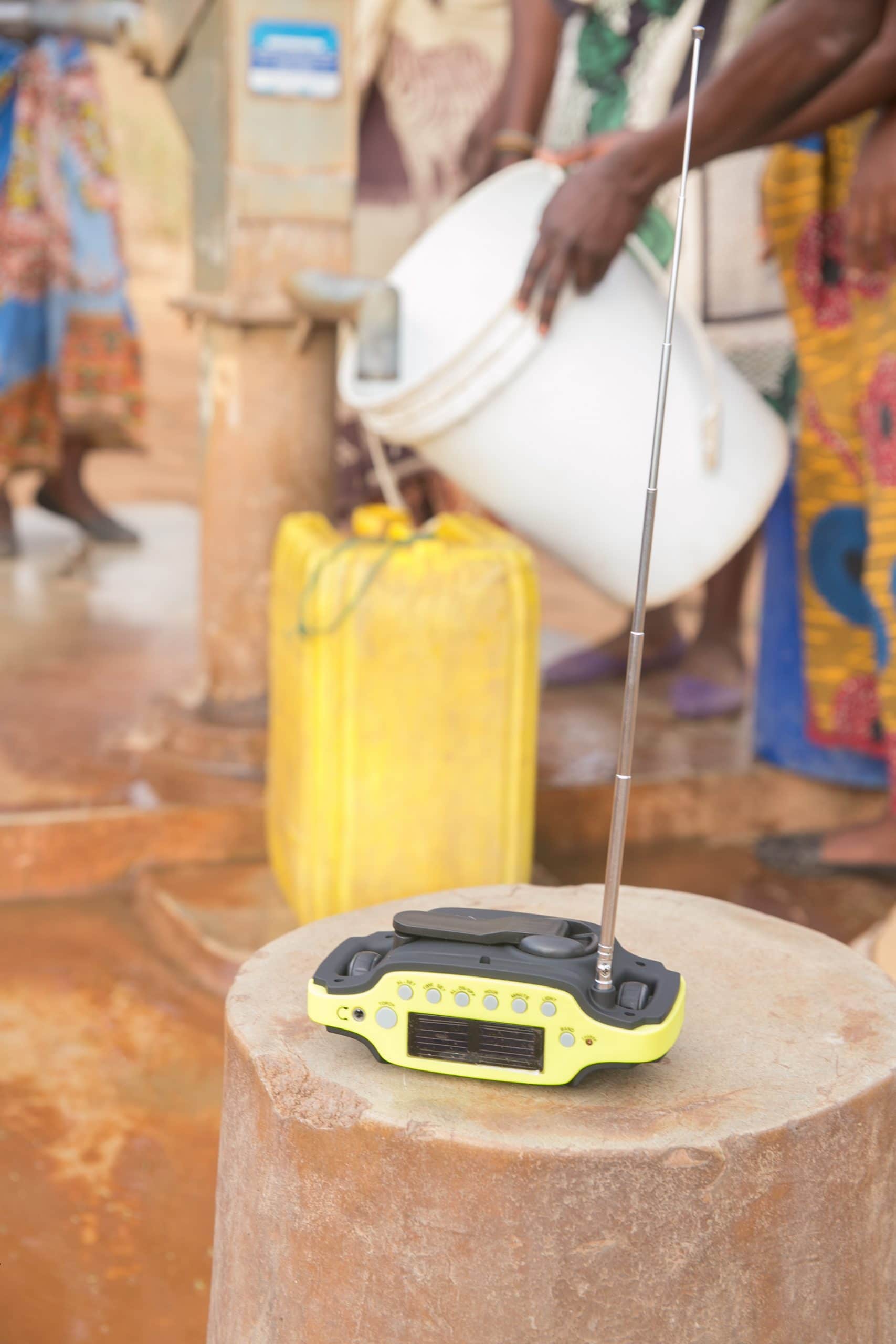 Of all the values that underpin our work at BASEflow, my favorite child would probably be “Boldness” which we describe as:

‘The recognition that the challenges we seek to address are complex, which is precisely why they have persisted for decades. BASEflow believes that courage is needed to take calculated risks and make
ambitious decisions to change what many in the sector believe cannot be changed’ As development workers, we oftentimes forget that our work, besides digging that well or building that
school, involves changing the accepted way of doing things. This usually means standing up for those who are voiceless, mostly because they are afraid to speak; which puts us in the firing line of people
with influence, power and, ultimately, vested interest in keeping things the way they are. It’s in such moments that one knows what one is really made of; for it is in such times when boldness is needed.
Nowhere is this more apparent than in that minefield which is the nexus between water and politics.

The nexus between water and politics in Malawi, like many places in the world, has always been a minefield of controversy where philosophies and ideologies battle for dominance. What may seem in
the eyes of many to be an indiscriminate threshold resource that should be accessible to all, is seen, through the political lens, to be a powerful tool to gain votes and legitimacy from the masses. The
recent Malawian tripartite elections in May of this year exemplified this through promises that were made that, on paper, seemed to go against principles of sustainability and the guidelines/frameworks
outlined in national policies such as the National Water Policy e.g. a case in point: https://mwnation.com/ndirande-gets-boreholes/ .

It is from this clash of interests, between the developmental and the political, that controversies arise; and, resultantly and understandably, civil society organizations, particularly those working in Malawi’s
water sector, chose to either tread carefully or avoid the likely fallout all together. It is a dilemma that we at BASEflow understand all too well.

So how can a civil society organization engage the political whilst navigating the minefield of controversy surrounding it? We cannot say we have all the answers, but, leading up to the May 2019 general
elections, we decided to add our voice to the public discourse around Water and Politics and whether or not, the two can or should mix. Using the power and reach of radio and inspired by our friend Ned
Breslin, BASEflow partnered with Sharpe Brains, a local radio production company, to develop a series of short adverts to reach rural communities and aspiring Members of Parliament to:

Building off real-life stories and voices, the radio campaign had 7 adverts in all which were broadcast 700 times from November 2018 until May 2019, reaching countless millions with key messages. To listen
to these radio adverts, visit our Team Leader’s blog:

People, Promise and Politics: Adding Our Voice to the Public Discourse on Water and Politics 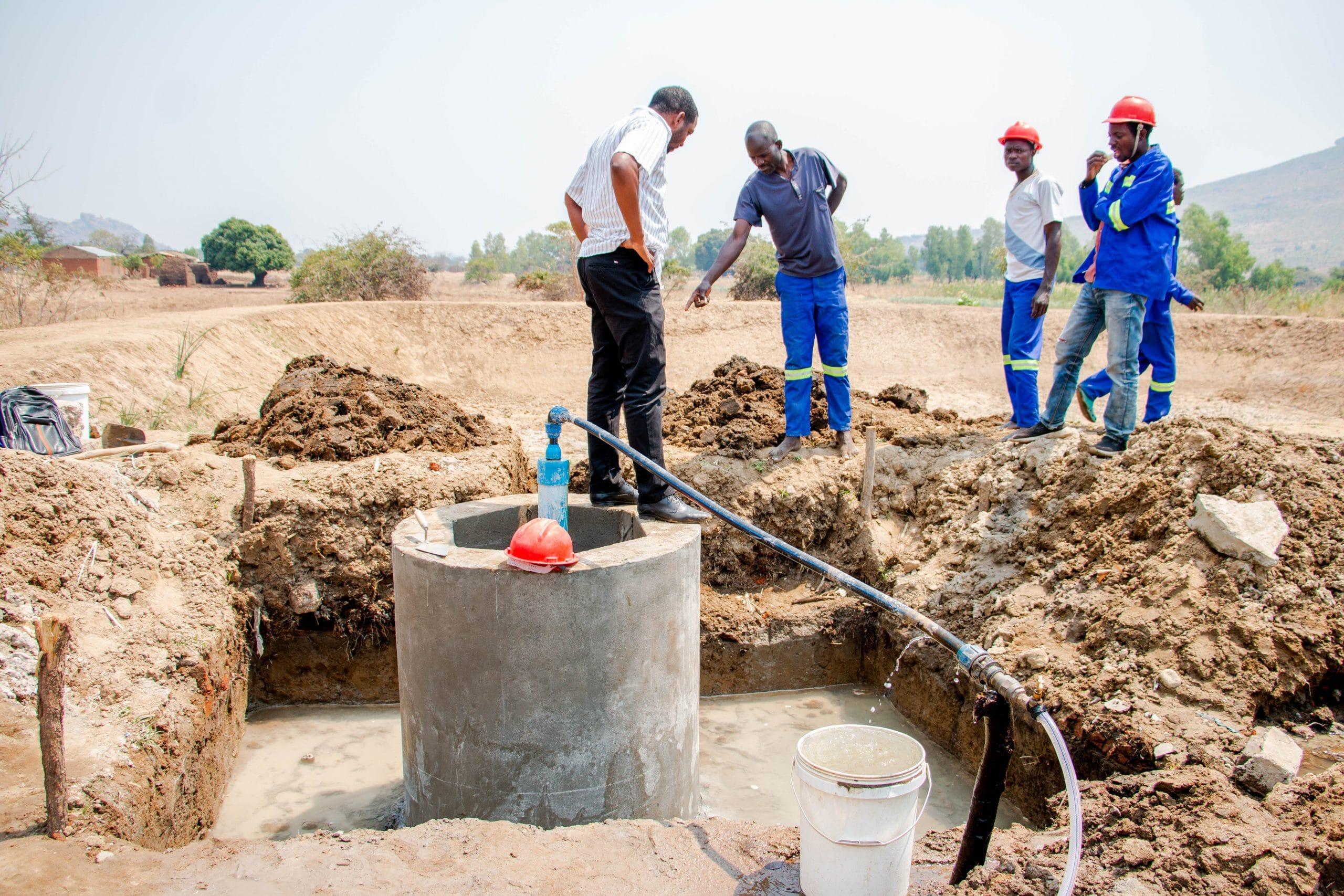 Artesian water is groundwater that is under pressure when tapped by a well and is able to rise above the level at which it is first encountered, often above ground. Artesian flows are often celebrated, as they give the appearance there is an unlimited supply of water, rising to the surface unaided by expensive infrastructure. However, there are significant problems associated with allowing artesian boreholes to flow uncontrolled including significant depletion of groundwater resources causing neighboring boreholes to dry up. BASEflow, in partnership with the University of Strathclyde, secured a grant from the Climate Justice Innovation Fund to build community resilience to the impacts of climate change by channeling the viable potential of artesian pressure towards sustainable agriculture to ensure improved food security, increased household incomes and provide a demonstrable alternative for utilizing waste water from artesian systems. BASEflow will be working with the Blantyre District Council to cap and control an artesian well, which has been running since 2007, in the small village of Jordani which has a population of 1920 people. Check our social media and updates pages for more information.

For more detailed information of the work done at Jordani, check out this mWater report below: 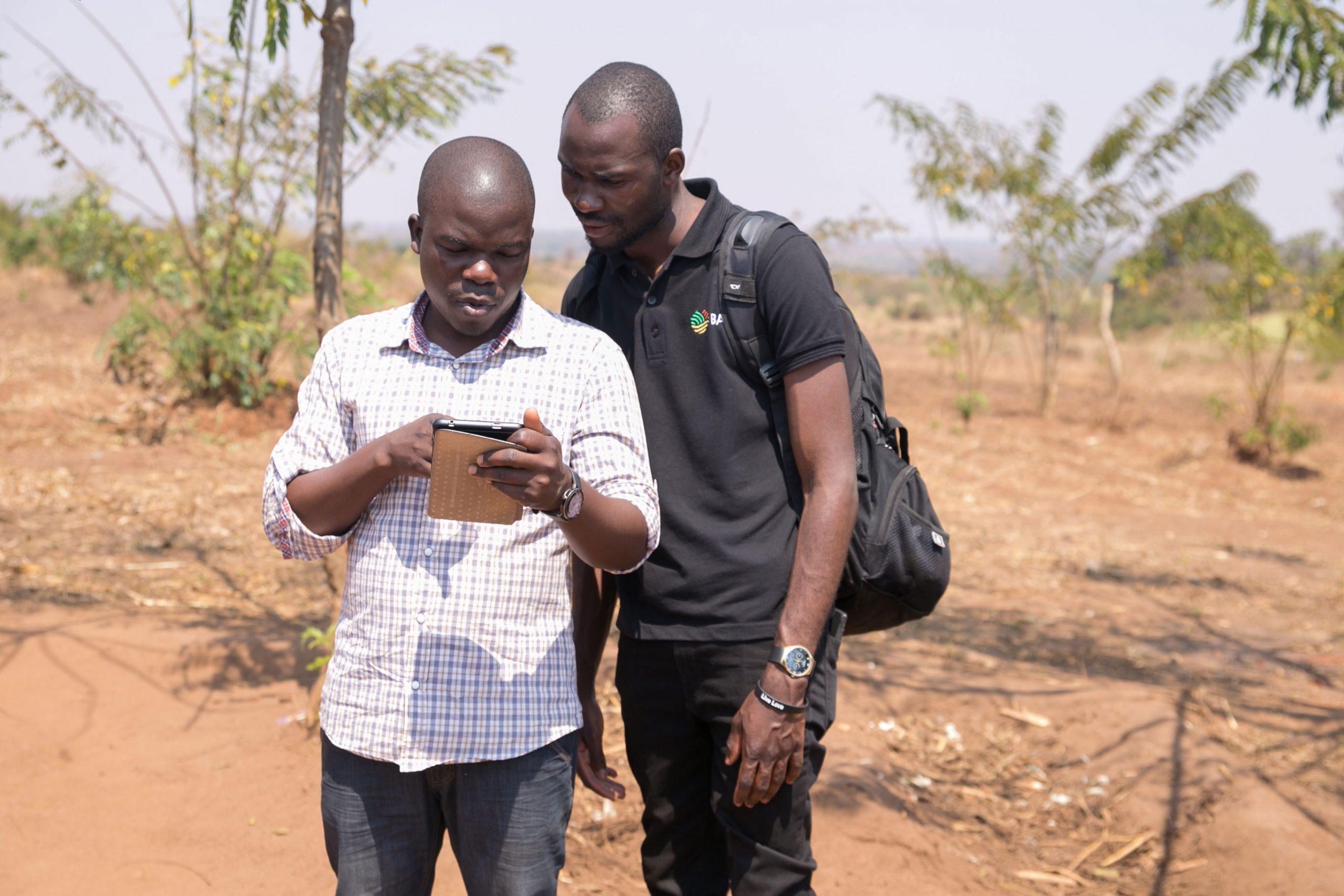 We can only manage what we measure. This is why BASEflow, as part of the Climate Justice Water-Futures Programme funded by the Scottish Government, is strategic partner for an ambitious mapping endeavor that will see every water point mapped across Malawi. By having a comprehensive understanding of how many water assets Malawi has and what is their current condition, the Malawi Government, and stakeholders, will have a firm foundation for planning for and achieving the sustainable development goals. BASEflow plays a pivotal role to this national endeavor through the creation of a call centre. The call centre is a team of staff and interns who provides support services to a network of government enumerators through training, field/technical support and data quality assurance. The call centre has so far trained 200 government extension workers, reviewed more than 120,000 surveys from the field and has received a satisfaction rating of 86% from enumerators for the high quality of support services they are receiving. The Water and Environmental Sanitation Network also featured the call centre in the 2018 CSO Performance Report as an example of an innovation that demonstrated transparency and accountability. Check our social media and updates pages for more information. 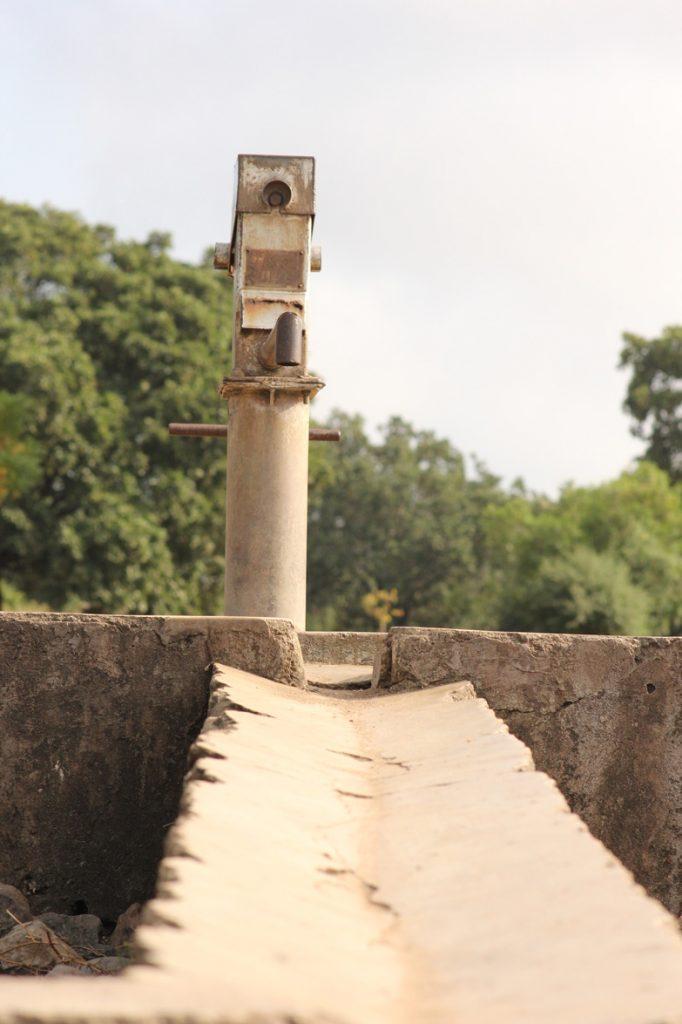 One of the major problems affecting handpump performance is the poor construction/installation of handpumps. Boreholes are either not drilled deep enough which leads to dry well during the summertime or they are not vertical which leads to faster wear and tear of the handpump further resulting higher-than-normal maintenance costs for rural consumers. However, without evidence it is very difficult to assess the cause of the break down. Borehole forensics, a detailed technical assessment of the surface and subsurface conditions of the borehole, is our response to this challenge! Using modern technology, borehole forensics helps uncover the major causes of borehole failure and, where possible, remedies the problem through rehabilitation, maintenance or replacement. Beyond just providing valuable technical data, this process provides the much-needed evidence to hold service providers, e.g. NGOs and/or private drilling companies, accountable for failed installations. Check our social media and updates pages for more information. Malawi is one of the poorest countries in the world, and is subject to considerable pressure on water resources, aggravated by a changing climate. Donors and NGOs are fundamental to the provision of rural water services, but around a third of installations fail due to poor quality installation. The combination of a weak regulatory regime, lack of community awareness and information, and disenfranchisement of vulnerable individuals, together mean that water service providers are rarely held to account for their failures. The impact, however, is felt principally by vulnerable rural communities. This reflects a serious imbalance of resources and power between the providers of rural water services, and the people who depend on them. This project, implemented in partnership with The Scottish Environmental Protection Agency through the generous support of the Climate Justice Innovation Fund, seeks to redress this imbalance by empowering poor and vulnerable communities to better hold rural water service providers to account, and help ensure more sustainable rural water supply in future. Building off the borehole forensics work with University of Strathclyde, this project focuses on the rights of vulnerable rural communities to ensure that money raised and spent in their name is used effectively and efficiently, creating real and lasting benefits that help some of the poorest and most vulnerable people in the world cope with the impacts of a changing climate on the availability of clean and reliable water supplies. Follow our social media or our website updates for progress on this exciting project. 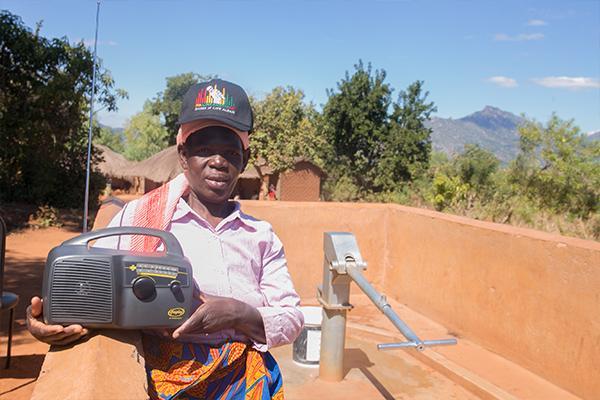 Using the power and reach of community radios, BASEflow piloted an innovative radio series called Madzi Ndiye Moyo (which means ‘Water is Life itself’) which ran for 6 weeks on local radio stations in Mid-2017. With 6 carefully themed episodes lasting no longer than 5 minutes, the pilot was a social experiment to assess the rural appetite for content centered around water resources management. Despite being on air for only 6 weeks, the radio series received positive response with triggered audience interest, not only through SMS, but also through walk-in queries at BASEflow offices. BASEflow’s radio series experience was selected for presentation at 2018 Water, Engineering and Development Centre Conference in July 2018. If you want to listen to the radio series episodes, please visit our YouTube page. If you would like copy of the monitoring report for more details, please email info@baseflowmw.com