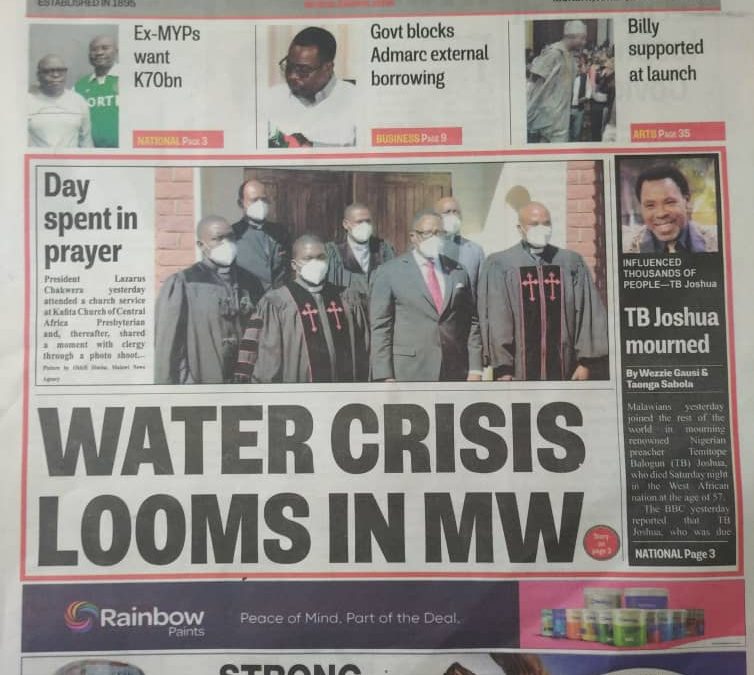 For the second time in a space of two months, BASEflow’s work and voice has inspired, influenced or featured on the front page of a major newspaper in Malawi. Following the April front page article in the Nation Newspaper, this time BASEflow’s Team Leader was interviewed as one of the leading experts on the water crisis in Malawi. An excerpt from The Daily Times article by James Chauluka and dated Monday, June 07, 2021 states: “Malawi faces the threat of water shortages if nothing is done to reverse the problem of dwindling water sources in the country, The 2021 Annual Economic Output Report Shows.”

Muthi, our Team Leader shared his opinion in the article (see news clippings above) and said ”The obvious problem causing water scarcity in the country is the population boom….the population is putting pressure on the country’s water resources.”

Muthi further emphasized the importance of managing catchments which has long been a neglected area in WASH programming, “The Government and Non-Governmental Organization (NGOs) have been focusing on supplying water rather than protecting the sources of that water.” He added. “Politicians and NGOs alike like to show people out there that they are supplying water… But its not just a matter of drilling boreholes. How much goes into checking the quantity of groundwater we have? How much is spent on protecting the sources of that water? Trees are planted every year but how much is spent on ensuring that the trees survive?”

The Daily Times even included a cartoon to accompany the front page article. Read the full article online here: https://times.mw/water-crisis-looms-in-malawi/